Eclipse Magnetics began life as part of The James Neill Steel Company (founded 1889) first appearing as a brand after the First World War.

In the 1930s Eclipse produced the first mechanically switchable permanent magnetic chuck. This technology is still used, in its modern form, in 99% of all grinding machines. In the 1950s Eclipse launched its red painted magnet range. Red not only became the most popular colour for magnets, but the shapes and sizes of that range also set a standard that is still recognised worldwide.

The Special Applications division was founded in 1991 to investigate new applications and the knowledge base of the company was further widened in 1999 with the acquisition of Magnacut Ltd, a magnet materials processing company.

In 2006 Eclipse Magnetics moved its entire operation into modern new facilities at the group’s headquarters at Atlas in Sheffield. 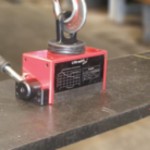